A couple of weeks ago I wrote about a smallpox outbreak in Vancouver in 1892, with quotes from Early Vancouver – a seven-volume set of books based on interviews with settlers undertaken by James Skitt Matthews, Vancouver’s first archivist.

“Major Matthews” – or simply “The Major” as he still is called in local archival circles, claimed the position of city archivist for himself in the 1930’s even though he was not at the time employed by the City of Vancouver.

The volumes of Early Vancouver contain information on a vast range of topics from city halls, to Hotel Vancouver construction, the fire of 1886, trees, streets, hockey teams, and Dominion Day (now Canada Day) celebrations through story, photos, drawings, and maps – frequently accompanied by notes and commentary from Major Matthews.

There is a wealth of raw information woven into the stories depending on what the witness noticed, cared about, or thought was important. Sometimes you only get teasers about a subject because conversations veer off in other directions following the interviewee’s train of thought, making the exact meaning, timing, or relationships mentioned in a transcript unclear.

For example, here’s an account of the 1892 smallpox outbreak by early Vancouver Alderman W.H. Gallagher. In its essence, the story reveals the sense of panic and actions taken by the citizens of the city and its nascent civic administration to make sure noone with smallpox landed in Vancouver, but Gallagher also makes mention of the police and fire department at the time, as well, incidentally, about there being no road to Port Moody at the time.

“I saw the trouble the time the Premier [a steamship] tried to land her passengers when we had the smallpox scare. I did not see the start; the news soon spread, and by the time I got there, there was a big crowd down on the C.P.R. wharf.

The news soon spread through the little city.

“It was this way.

Capt. O’Brien was in command of the Premier, as she was then; afterwards the Charmer, and the Premier was an American ship; flew the American flag, and had been down at Seattle and of course, when she came in she had to pass the customs, and the health officer went on board and he found smallpox, and would not allow the passengers to land, and Capt. O’Brien was determined to land his passengers.

So Capt. O’Brien mustered his passengers, and said he would land the whole crowd of them, and then the fun started.”

Major Matthews: Who started the fun?

Mr. Fraser: “The Premier. The news spread like wildfire, and in those days we had only three or four policemen in town, and they could not handle the situation, so they called out the fire brigade. 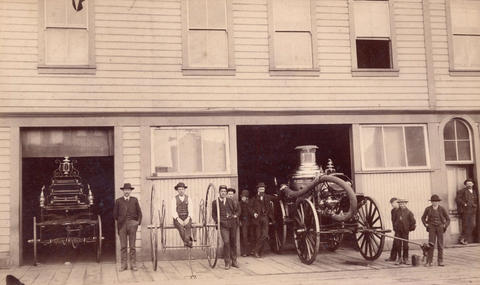 The fire brigade was all volunteers then, and I don’t know just all about it, because I was not there at the start, but the Premier turned her steam hose on to drive the crowd of onlookers on the wharf further back, and some of the crew on the Premier started to throw lumps of coal, and then the fire brigade turned on the” (cold water) “hose, and someone cut the ship’s line, and she drifted off into the harbour, and hung about for a while, and then she turned and headed for Port Moody, and of course there was no road to Port Moody then, and she went to Port Moody quicker than they could, and she went up to Port Moody and there was no one there to stop them landing the passengers.”

Early Vancouver contains a lot of rich raw information but be aware that much of it needs to be untangled and cross-referenced  in order for it to be comprehendible.

Still the stories give a feeling for the subject at hand,  and the anecdotes suggest countless embryonic story ideas.

And now, since 2011, the 7-volume set is available electronically  in 2011.  Before that, researchers had to go in to the Archives to look at the print editions, consulting  each volume’s index individually.

Now you can search across all seven volumes  at once, or limit your search to a specific volume.

For keyword searches, use quotation marks for phrases.

Or use the advanced search page to do a Boolean-like search using the Ultraseek search engine over multiple fields (body, title, link etc) and by date.

Enjoy perusing this fascinating resource – as much a product of the time Major Matthews collected the stories as the actual information they convey.

I love flying down to earth and helping people travel back in time to discover what life was really like in a bygone era. How much was different? And at the same time, how much about life was the same, regardless of the era. Let me help you with historical research tips and tricks including the use of archives and other rarified collections. Along the way I'll also share some of my own research experiences and discoveries, and some of my own writing on Vancouver's local history. View all posts by Archive Angel